Fentanyl is a deadly opioid that is increasingly found in illegal drugs like pain pills, cocaine and even marijuana. Joshua O’Neal with the Fulton County Board of Health says they will partner with organizations to provide fentanyl test strips so people can check drugs for its presence. GPB’s Ellen Eldridge reports. 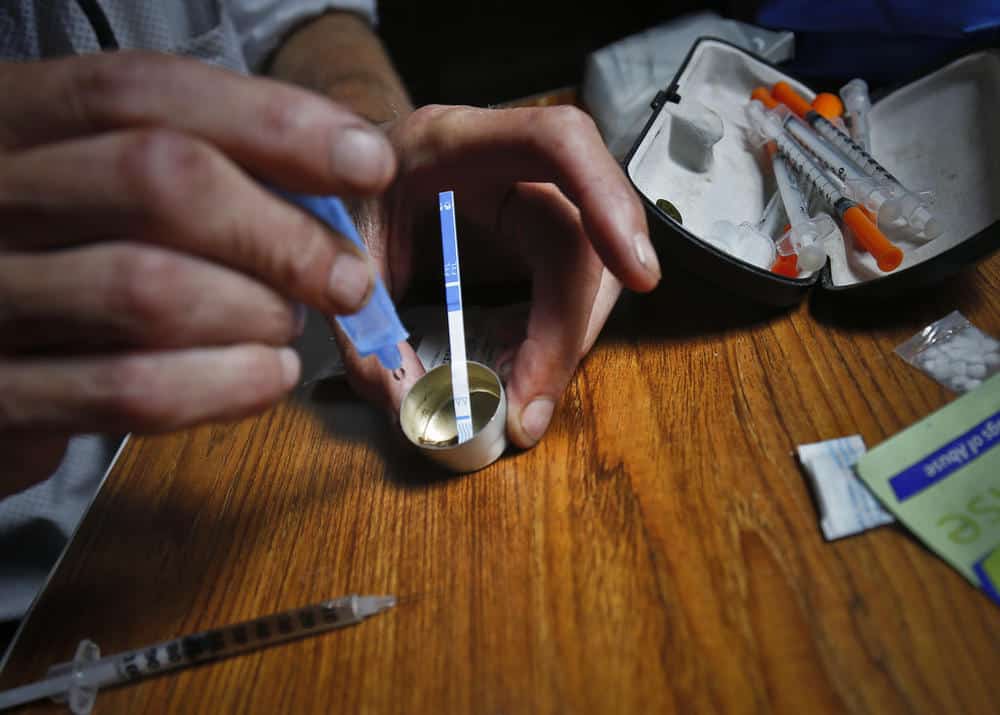 A person prepares heroin, placing a fentanyl test strip into the mixing container to check for contamination, Wednesday Aug. 22, 2018, in New York. If the strip registers a “pinkish” to red marker then the heroin is positive for contaminants.

The Fulton County Board of Health is making sure people who use drugs can do so as safely as possible by getting test kits for fentanyl.

The opioid is many times more potent than heroin and has contributed to a sharp increase in overdose deaths.

So many people died over the last two years from drug overdoses and COVID-19 that life expectancy continues to drop, according to the Centers for Disease Control and Prevention.

Fentanyl-related overdose deaths have spiked since the start of the pandemic, rising more than 106% between May 2020 and April 2021.

That represents more than 1,200 dead Georgians.

Testing drugs for fentanyl can save lives, Joshua O’Neal with the Fulton County Board of Health said.

That’s because the deadly opioid is increasingly found in illegal drugs like pain pills, cocaine and even marijuana.

Through a partnership with StopHIVATL and the Atlanta Harm Reduction Coalition, free fentanyl test strips are available now to stop opioid overdose deaths.

Many times, O’Neal said, cocaine and other drug users do not know to expect fentanyl.

“I've even heard a couple of stories about people who had, you know, blunts that had fentanyl (that) sent them straight to the hospital,” O’Neal said.

The campaign raises awareness of some of the dangers of illegal drugs, and provides an opportunity to take harm-reducing steps.

Allowing users to test their drugs does not encourage or condone illegal drug use, but it does save lives and provides a chance for substance use disorder treatment and recovery, O’Neal said.

“Our test strips are such a great tool for engaging people who use substances into our programing so that then we can support them with other aspects of their health, especially around HIV and Hep C,” he said.

And that reduces harm to society.

The campaign will also connect people to other resources.

“When they keep coming back to us on the regular for these tools, and we build a relationship with them, it's really easy to then build a relationship of trust and support,” O’Neal said. “So that when people are ready to make other decisions in their lives, we're here for it and can help navigate them accordingly.”

The fentanyl test strips are free and available on the StopHIVATL website as well as in metro Atlanta health centers where folks can receive HIV resources including testing, pre-exposure preventative treatment (including PrEP), and post-exposure care options.

This story comes to StopHIV ATL through a reporting partnership with GPB News, a non-profit newsroom covering the state of Georgia.